On the 27th August 2018, my boyfriend Tom and I flew to Amsterdam from London, where we would be staying for the next three days on the first half of our European min–break. I have been talking about going to Amsterdam for the past three years now and this Summer was the perfect time to do it, having just finished University and being in the process of applying for a full-time job. There were a few reasons I wanted to visit Amsterdam: I had never been before, I wanted to visit both the Anne Frank Museum and the Van Gogh Museum, but most importantly, I wanted to meet my Internet Best Friend for the first time since we began talking four years ago.

Three days was the perfect amount of time to spend in Amsterdam. We spent all three days visiting Museums and other tourist attractions, but yet still had time in the evenings to have a drink and watch Netflix. I am sure that there are more places we could have visited had we been there longer, but it was the perfect amount of time to get a taste of the City and I know I will be back shortly.

We decided to stay in an Air BnB in Oud-West, which is a 40 minute walk from the Central Station and within walking distance of all the other main tourist attractions. We decided to do this because it was cheaper – we had cooking utensils so we could prepare our own meals and the Air BnB was located outside the City Centre. I also personally love staying in Air BnBs as they give off a more homely vibe that I do not feel hotels give off and with Air BnBs, you are more able to come and go as you please.

Ree 7 is a café boasting a range of delicious dishes from sandwiches to salads to soups, available for both breakfast and lunch. We ate here for lunch on our first day in Amsterdam, having gotten the recommendation from Caitlin Bea’s blog, but we were both sold in person on the cute inner and outer décor of the café. I ordered the red velvet pancakes with white chocolate and they were delicious! 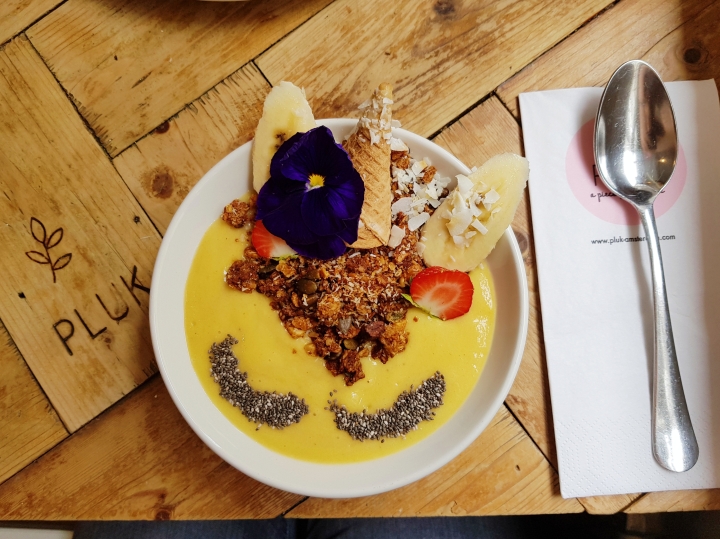 Pluk is run by the same company as Ree 7, which explains the Instagram-worthy inner and outer décor. Similar to Ree 7, Pluk offers a range of delicious dishes from sandwiches to smoothie bowls to pancakes, available for breakfast and lunch. However, whilst Ree 7 is primarily a café, Pluk also has a shop downstairs selling a range of stationary and home décor. This does mean, therefore, that the café is smaller and you may have to wait a while to be able to eat there.

The Vegan Junk Food Bar is a chain of three restaurants in Amsterdam that boast a menu full of vegan junk food, from burgers to tortillas to bitterballen. I decided to order the Original VJFB Burger and it was incredible – well worth the slightly more expensive price tag.

Vondelpark is Amsterdam’s most famous park. It was designed and built in 1850 and now is a popular place for both tourists and residents to visit. It was recommended to us to hire bikes and cycle around Vondelpark, as anyone who has visited Amsterdam will know that cycling is the main form of transportation there. There were various different paths to take around the park so we were always discovering new structures, from fountains to bridges to artwork. An important thing to note is to take care to lock up your bikes if you do choose to explore on foot whilst having hired a bike, as bike theft is common in Amsterdam. We hired the bikes for 2 hours which was the perfect amount of time to explore the park, take photographs and grab a drink at the Café.

The Heineken Experience is a tour of the factory where Heineken Beer was made up until 1988, involving talks about the process of making beer, the progress of the Brand since creation and a tasting of the different Heineken beers. I am not normally a fan of beer but I really enjoyed the experience, especially learning about how beer is made.

The A’Dam Lookout was an experience that we found purely by accident by getting the ferry across from Amsterdam Central station. The A’Dam Tower offers panoramic views across Amsterdam as well as the opportunity to take a ride on Europe’s highest swing, which swings out over the edge of the 100m tower. An experience that you will never forget for sure!

This was the museum that I was most excited to visit in Amsterdam. The Anne Frank House is a museum that tells the story of Anne Frank, from her birth to her death, as well as the stories of the two other families that hide in the attic alongside the Frank family. Having read Anne Frank’s Diary as a teenager, I was enthusiastic to finally see where the diaries were written. It was definitely an emotional experience but I would highly recommend. The Anne Frank House is online tickets only due to high demand: 80% are released two months in advance and 20% are released at 10am on the day, so I would recommend booking in advance if possible.

The Van Gogh Museum is the largest collection of artwork by the Dutch painter, Vincent Van Gogh, as well as artwork that inspired his work. The Museum also tells the story of Van Gogh, from birth until his death. Although it is an additional charge, I would recommend getting the audio guide for this Museum as it really adds to the experience and explores the paintings in a way I never had before.

This tourist attraction is fairly self-explanatory. It is the perfect place to take the stereotypical, I have visited Amsterdam, photograph, although since the sign can be very crowded, you will probably not get a picture by yourself with the entire sign. I would recommend aiming for one letter: for example, I chose the A for Amsterdam.

Have you ever visited Amsterdam? What was your favourite part?

This site uses Akismet to reduce spam. Learn how your comment data is processed.